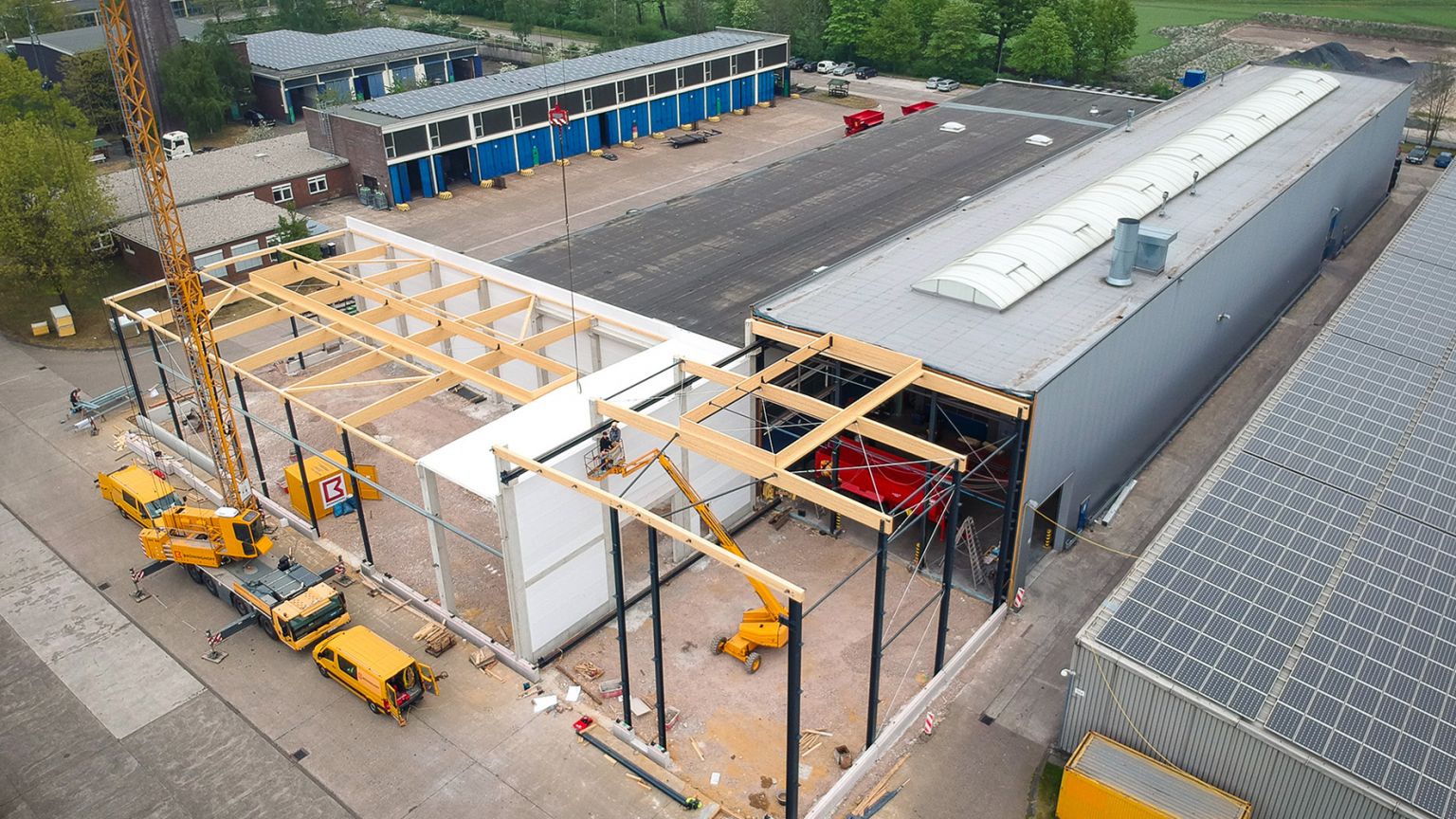 By building a new warehouse, Krampe has responded to both steadily increasing vehicle production numbers and the desire to optimise its warehousing and associated processes by means of new software and digital hand-held scanners.

Construction works for a new central warehouse and extended final assembly started in early March 2020. Once the excavation works for the foundations had been done and the column foundations had been cast, the former facade cladding was moved inside the building to separate the space within the halls. A mobile crane was then used to erect steel and concrete supports, an aerated concrete wall was built for fire protection, and timber roof girders were installed. Thanks to a modern machinery fleet, all these works were done quickly and easily – just like assembling a giant puzzle.

Krampe was quite lucky with the weather throughout this time. Once the structural frame had been built, it was lined with thermal sheets bolted to the girders, and the building soon grew into its final form. Extensive strip lighting was installed in the warehouse halls, providing them with ample pleasant daylight throughout.

In July, the connection to the final assembly section was prepared, and the floors were insulated, concreted and screeded. A total of 25 concrete mixers and one concrete pump were needed to pour the new floors. Once this was done, there was a short summer break, as the floor needed to set for three weeks. The street around the new pallet warehouse also needed to be redone as part of the building works. This was necessary because there were differences in height, and also to be able to provide new access ramps to the gates.

Towards the end of the construction phase, high-speed doors were installed, all electrical installations were completed and heating plates were mounted. The new pallet warehouse is heated with exhaust heat from the neighbouring biogas plant. The company's internal photovoltaic system, which generates more electricity than the entire business consumes, supplies power for the hall lights and all the other loads.

Once the indoor cranes and new rack systems had been installed, the Hall 49D warehouse was completed and ready for use in October. Just under 600 pallet cage spaces and 500 shelving spaces are now used for storing items for final assembly and dispatch of Krampe vehicles, above all. A newly rolled-out warehousing software and mobile, hand-held scanners allow stock entries to be made in the ERP system in real time. As a result, stock picking based on customer orders is now done more efficiently.